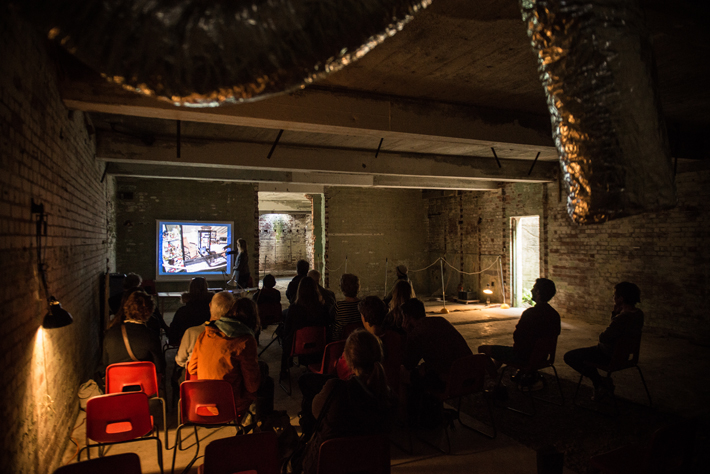 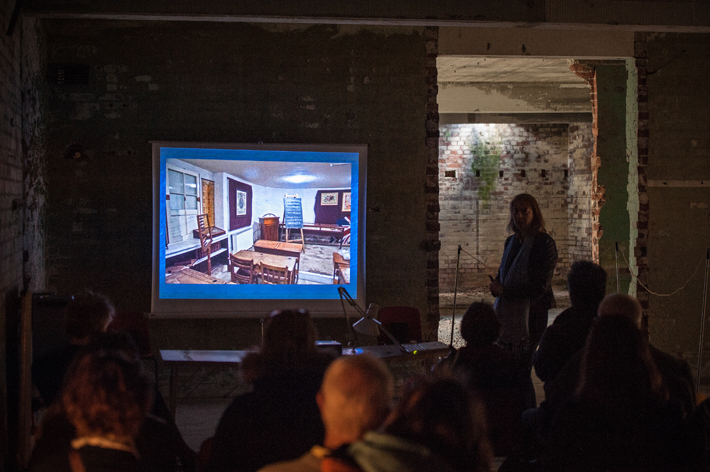 Goonhilly Village Green was delighted to present a mixed programme of talks about Goonhilly Downs and the surrounding area. The lecture series was presented with the kind support of local renewable energy company Wattstor, whose solar powered batteries illuminated the dark shell of the Happidrome. Divided into two sessions, the morning was opened by Katherine Ashton, Director and Curator at Helston Museum. Her talk introduced us to the collections and their relevance to the social history of the area, revealing how people lived and worked alongside the objects, tools and equipment used in a range of professions, including telecommunications and radio.

Sir Ferrers Vyvyan of the Trelowarren Estate followed, presenting a highly personal account of his relationship and understanding of Goonhilly Downs and the wider Lizard Peninsular. Using selected readings from several authors who had aided his understanding of the area, we were able to share his enthusiasm and knowledge of the place and places he went on to discover directly.

Dr Caitlin DeSilvey from Exeter University’s Environment & Sustainability Institute completed the morning sessions, leading the audience to what she calls the ‘secret garden’, a roofless building on the site with a magnificent willow tree at its centre. Using the setting as a backdrop, she shared her thoughts on ideas of ruination and how it could be managed for future generations, suggesting that some things needed to be left to decline and ultimately disappear, rather than constantly being frozen in time and place. Her talk generated a lively response from participants, leaving people with much to think about.

Over lunchtime, we listened to an ‘in conversation between Liminal (Frances Crow and David Prior) and Tom Ebdon, Head of Architecture at Falmouth University. Particularly referencing their GVG commission, Transient Parish: Goonhilly Downs, an 8m high bell tower temporarily erected on the ‘village green’, they described their interest in the concept of the parish and its relationship to the distance the sound of bells carries in determining its boundaries. Linking this to a 2014 commission, we were then treated to a screening of Of This Parish exploring the concept of the parish bell and its reach with residents of a local village in Portugal. 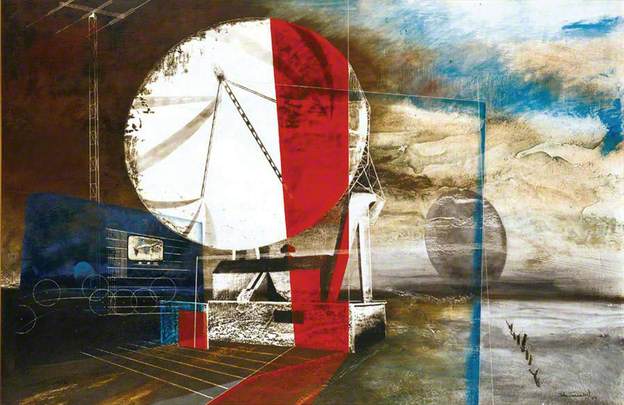 The afternoon session began with Henrietta Boex, Director of Falmouth Art Gallery introducing the audience to the work and life of John Tunnard, a 20th Century artist who had been active on the Lizard from the 1950s and 1960s. Influenced by the Surrealists, his work explored ideas of landscape and its relationship to technology and development. An artist well regarded in his day he had become one of an overlooked generation which will be remedied during December at Falmouth Art Gallery when he is shown alongside other Lizard artists such as Bryan Ingham.

Dr Jonathan Bennie from the Environment and Sustainability Institute followed, giving a fascinating talk about the impact of nightime illumination on flora and fauna, drawing on experiments currently underway on the Lizard. Prefacing his talk with a short animation, Nuit Blanche made by Kevin Dupont, he described the biochemical and physical changes experienced by living organisms (including us!) of extending daylight through artificial means and what measures might be used to counter it.

The afternoon was rounded off by Eddy Search from GES Ltd who took us through the past, present and future of Goonhilly Earth Station, including period Pathe News clips about the construction of the satellite dishes and future aspirations of the new owners including being a part of the NASA and ESA Orion Mission to capture an asteroid and put it into orbit around the moon! Bruce Willis – eat your heart out!
And finally, the programme closed with a screening of Ian Helliwell’s fascinating documentary about F.C. Judd, an electronic music pioneer and former World War Two radar engineer who championed home field recordings and reel to reel tape editing and experimentation. A film that deserves a much wider broadcast on national TV in our view.

Image: Steven Bond / www.farion.co.uk
We would like to extend our sincere thanks to everyone who took part and shared their knowledge and understanding of Goonhilly Downs and the surrounding area. They left us with a rich sense of place and time. Special thanks to Wattstor for powering the lecture series on stored photovoltaic energy.