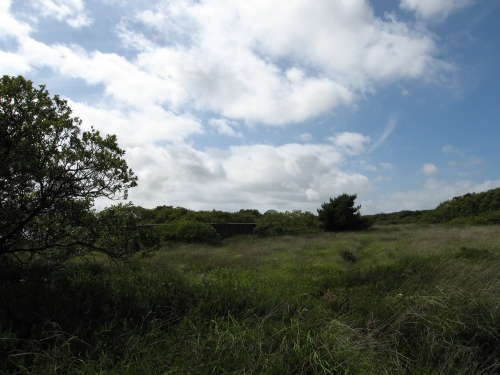 Goonhilly Downs is designated as a Site of Special Scientific Interest (SSSI) for the diversity of life which its heathland habitat supports. It is part of a large (1600ha) National Nature Reserve, managed by Natural England. However Goonhilly is special for more than just its natural ecology. It is home to the iconic satellite dishes of Goonhilly Earth Station, which received the first transatlantic television signals in 1961 via the Telstar satellite, a moment of huge cultural significance. The dishes are now transmitting and receiving into deep space as part of a global radio astronomy network. The futurism of the Sixties space race intersects a Bronze Age landscape strewn with barrows and earthworks. The Drytree Menhir (standing stone) marks the convergence of five parish boundaries.

This history is overwritten with that of WW2; the remnants of RAF Drytree. Glider obstructions read as burial mounds. The missing masts of the radar base now manifest as gigantic wind turbines and modern antennae. Ghosts of highwaymen and landlocked ships haunt Goonhilly’s dreary wastes. Yet, due to its underlying serpentine geology and elevated position, Goonhilly has never been a place of permanent habitation but one of experiments. Ecology, archaeology, crofting, radar and space-age innovation are the big themes that define its unique character. Yet there are other small stories that go largely unremembered or unwritten, which Goonhilly Village Green aims to tell, as the project unfolds.

Goonhilly Downs is famed for its heathland habitat. It supports a diversity of plant species including Cornish Heath (Erica Vagans), Purple Moor Grass, sedges, mosses, butterworts and orchids. Linking the Lizard has a fantastic resource of botanical information about the area.

Goonhilly Downs is archaeologically significant for its large concentration of Early Bronze Age (c2500 to 1500 BC) round barrows. The Dry Tree menhir (standing stone) forms part of a well preserved ancient ceremonial landscape at Dry Tree, which is the highest point of the Downs. The standing stone, which had been toppled in antiquity, was only re-erected in 1928. There is also a large barrow, named in an Anglo-Saxon charter as cruc drænoc or ‘barrow at thorns’, which marks the meeting point of five parish boundaries, and is also a waymark along an important medieval trackway.

With thanks to Historic Environment Service at Cornwall County Council.

More about the Menhir on The Modern Antiquarian

Small holdings called ‘crofts’ were established by local farmers. These were enclosed areas of land within larger commons, where farmers cut turf, collected furze and grazed cattle. The remains of two 19th century crofts, Croft Noweth and the Dry Tree Croft are still visible.
More on the crofts of Goonhilly:
Goonhilly Downs: A walk through history with Charlie Johns

The Earth Station is built on part of the site of a WW2 Chain Home radar station, RAF Dry Tree, and the concrete bases of the radar receiver and transmitter masts and mast stays are scattered over the site, as well as the remnants of over 50 buildings and more than a hundred anti-landing obstructions. The nearby area housed another three radar bases (Treleaver, Trelanvean and Pen Olver) and an airfield at RAF Predannack, making for a wealth of WW2 archaeology.

The ‘Happidrome’ was a  nickname for a specific type of radar building (like this one at RAF Patrington in Yorkshire). It was located at RAF Treleaver, not on the Drytree site. The building was named after a popular BBC radio series of the era. 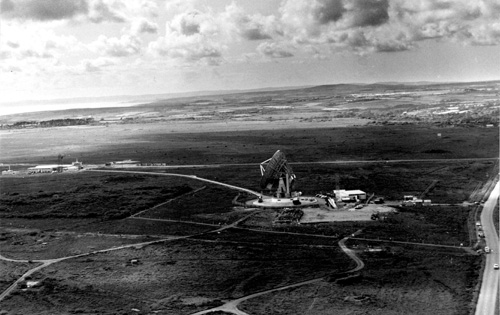 As well as the visible remains of RAF Drytree, some of the site was subsumed by the Goonhilly Satellite Earth Station, one of the first three satellite stations in the world. It was from here, in 1962, that the first live transatlantic television picture was transmitted to America from Antenna No. 1. This Antenna, now christened Arthur, has recently been given Grade II Listed Building status. The site is now home to GES Ltd. who have re-purposed Arthur to explore deep space as part of a global radio astronomy network.